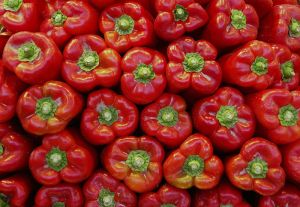 If you told me that I was going to spend my life on a desert island and could only bring one dish with me that dish would be Chicken Paprikash. If you woke me up in the middle of the night and asked me what my favorite dish was growing up I would have to say Chicken Paprikash. It was our comfort food. It was a regular staple of the nightly dinners that Mom cooked. As I got older I realized that I never saw the dish on any restaurant menus and I never saw it cooked by anyone else. Being out of sight and out of mind it slipped out of my repertoire for many years until my friend Anne told me that someone she worked with brought her 2 pounds of good Hungarian Paprika back from Budapest and asked me what I wanted to make with it. I immediately said Chicken Paprikash and she squealed with excitement. It was staple dish in her house growing up and it was possibly the first time I had found someone else familiar with the dish. Her background is Slovak and Hungarian and her family served a lot of the Central European dishes that my mom grew up on and cooked for us regularly. The only difference between the dishes that Anne and I described to each other was the addition of sour cream to her version. We made a huge batch with the incredible Hungarian paprika and added the sour cream of her childhood. We served it over egg noodles and it was a little slice of home that I had not had in a long while. I have since added it back in my regular repertoire and offer a slightly juked up version. 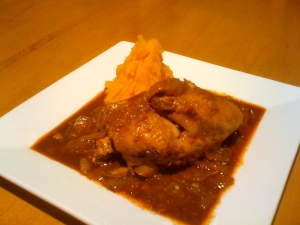 This is a dish of simplicity and only has a few ingredients but the flavor of good Hungarian paprika is much different than the tasteless red dust that tops your deviled eggs and potato salad. If you have one of those little jars of paprika in your cabinet that has seen too many decades then please ditch it immediately. Buy some good Hungarian paprika and you will be rewarded a hundred times over.

After Abby posted her version I got to work in the kitchen on mine, which couldn’t stray very far from the chicken, onion, garlic, paprika, salt and pepper that comprise the dish. I had a whole chicken and decided to cut it up and use the back and cut offs to make a brown chicken stock, which would serve as the base of the sauce. I also decided to use the liver to fortify the sauce by poaching it in the gravy and then pressing it through a strainer. It added just the right amount of thickness and richness without taking away from the dish. 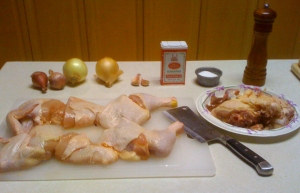 Start by removing the back from a whole chicken and cutting it into 8 parts leaving a good amount of the breast meat on the wing. Chop the back and other cut offs into small pieces and brown in a saucepan with a little of the fat of the chicken. Salt and pepper your chicken and brown well in a large skillet. 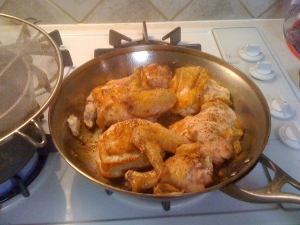 Nice and brown is the key

I start the dark meat and wing sections first to prevent the breasts from overcooking. Don’t add any paprika at this stage because it burns too easily. When the bones are well browned add some water and cook until needed. When the chicken is nicely browned remove it from the pan and remove most of the excess fat. Add your onions, shallots and garlic with a little sprinkling of salt and pepper and sauté until the onions are translucent. At this point add 1 tbsp of the paprika and cook for 1 minute then add the previously prepared stock. 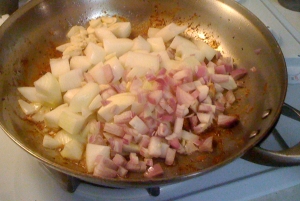 Add the chicken pieces back to the pan and sprinkle the remaining paprika over the top. Cover the pan and cook for 20 minutes or so until the chicken is well cooked and very tender. Remove the chicken and bring the heat up under the pan. Add the liver to the sauce and poach for 3 or 4 minutes or until it is just cooked through. Push the liver through a strainer with the back of a spoon into the sauce and stir it in to incorporate. 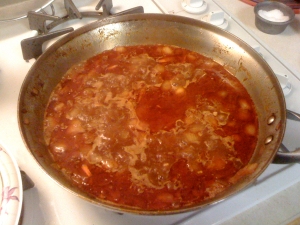 The classic preparation is to serve it with egg noodles or mashed potatoes but we often had it with rice, which was always my favorite. These days I try to stay away from too many simple carbs so this time I served it with mashed rutabaga and butternut squash which really matched well with the rich sauce. If you would like to cut some of the fat out of the dish and make it a little bit easier you can use boneless skinless thighs as they can withstand the cooking better than breasts and just use a little low sodium chicken stock for the sauce.