As a foodie and admirer of locally made products, one of the greatest benefits of living in rural New England is stumbling across the hidden local food treasures that are tucked away in the small towns and back woods of this region. On our frequent drives on the well worn roads of our immediate vicinity in New Hampshire, we discover these wonderful spots and we’re always grateful that we made that random turn or followed that tiny sign. In some cases, we get recommendations from people we know. In other cases, we just get lucky. This past weekend, we hit a small jackpot.

It was a beautiful fall day in New England, the leaves were starting to turn and it was 66 degrees with a perfect deep blue sky and not a cloud in sight. 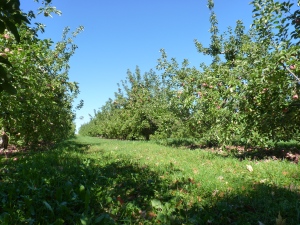 Its apple season and the early varieties like McIntosh, Spartan and Cortland are ready to be picked. We went to our favorite orchard, Meadow Ledge Farm, which I blogged about last season, to pick our first load of apples. And since it was such a beautiful day and we had a lot of chores that needed to be done at home, we decided to procrastinate a bit and drive around enjoying the scenery before schlepping our apples home.

On some of our recent summer visits to Canterbury Shaker Village, we’d noticed a small sign on a side road for a local smokehouse. The sign read “bacon, ham, cheese, jerky” and that all sounded appealing to me. We decided we’d take our chances and find this little smokehouse to see what they had going on. When we turned off onto the dirt road that lead to the smokehouse, I began to wonder if we’d make a mistake. Boy was I wrong. When we pulled into the driveway for Fox Country Smokehouse, I immediately recognized the logo and remembered seeing their products at Quality Cash, my favorite small, local store, the place where I regularly buy meat. The folks that run Quality Cash know what they’re doing. They shop carefully and carry many of the locally produced items that I love, like beef raised at Miles Smith Farm. They have very high standards at Quality Cash, so when I saw the sign for Fox Country Smokehouse, I knew we’d made the right choice. 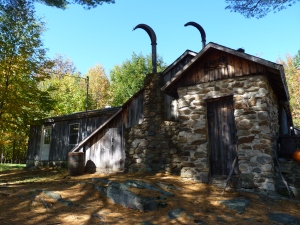 Charley Fox and his wife built the smokehouse in 1969 using stones they found on their property. They intended to smoke the pork they were raising on their small farm in Canterbury, New Hampshire and maybe help out some of the other local farmers as well. Over the years, the business grew and his son Matthew now runs the smokehouse and the retail and mail order business. The whole place smells like 40 years of wood smoke. We could smell it when we drove into the parking lot. The stone building holds the smokehouse and a small retail space where they sell all their products. They had about 10 different kinds of cheese, several flavors of jerky and some smoked nuts for sale. And they had a big cooler filled with various kinds of smoked meats in sealed packages. They had huge hams and sliced ham steaks. They had several kinds of sausage and bacon. They had chickens and ribs and beautiful pork loins. But the item that most intrigued me was the whole smoked duck. Matthew was running the store that day and he and his buddy described all the products for us and gave us some ideas on further preparation.

We bought a duck, a small rack of ribs, a slab of peppered bacon and some maple beef jerky. We ate the jerky in the car on the way home and while it varies greatly from the Texas jerky we’re accustomed to, it was quite good. When we got home, I took the duck out of its package and surveyed it skeptically. It sort of resembled a shriveled old man. But it smelled fantastic. 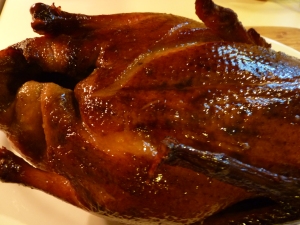 Matthew suggested that we just eat it cold, but I wanted the full experience so I turned the oven on to 325 and contemplated for a moment. I decided to brush the skin with a little honey before putting it in the oven. I also brushed the ribs with some honey and placed them both on a rack in a roasting pan. 45 minutes later, the duck had plumped up, the skin had darkened a bit and we were tucking in. The smoky flavor was certainly present, but the most striking element was the brine. The duck was rich, salty and moist and there were some spice notes that we couldn’t quite place. But when we tasted the ribs, there was an unmistakable hint of clove. It was truly a unique experience. 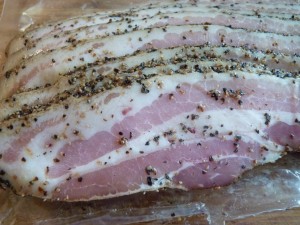 The next morning, I cooked some of the thick sliced bacon. Now, there are some amazing pork products being smoked here in New Hampshire and one that gets rave reviews is North Country Smokehouse bacon, produced in Claremont, New Hampshire. It’s delicious, but the Fox bacon was the best we’ve ever had.

Fox Country Smokehouse ships their smoky goodness all over the world, which is a very good thing because it’s not an easy place to find. However, if you’d like, I’m more than happy to make a special trip for you, just so I can go back, smell that stone building one more time and tell Matthew how delicious his products are. Just say the word and I’ll be on my way.

6 Responses to Smoking in Fox Country