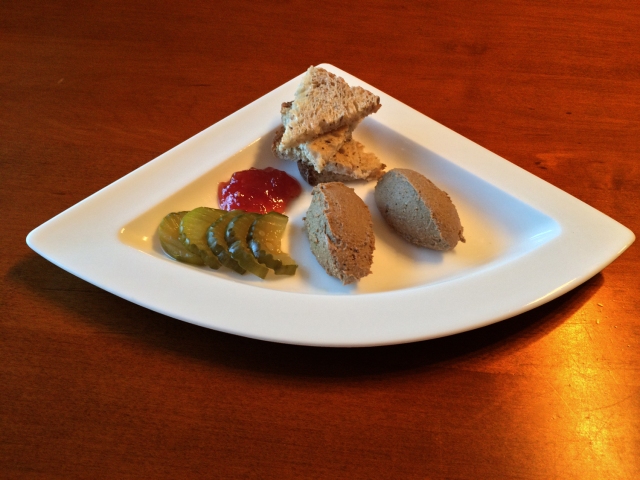 But I love Foie Gras. We had dinner at Restaurant Eve in Alexandria Virginia last weekend and we did the tasting menu. The first course offered “Terrine of Foie Gras with Virginia Blackberries, Lemon Verbena and Blackberry Roll” and it was divine. The Blackberry Roll was a short pastry with a house-made preserve. I always order Foie Gras when it’s on the menu not only to reward an establishment for a bold menu choice, but because I rarely find myself in a place that would serve it.

Growing up, Mom served liver and I just never got used to that livery taste. Even chopped liver, which was a staple at any special event or holiday meal, just did not appeal to me…that is until I went to a company holiday party at Texas French Bread back in the day and Jeanine served me chopped liver — and I loved it. She sautéed apples with the aromatics and deglazed with cognac, adding the sweetness that balanced out the metallic taste I hated. It was a wow moment and from that time on I have developed a taste for a well prepared liver mousse and ultimately, when I grew to afford it, the foie.

My wife Kim likes liver and when I get a bird with a liver in it, I’ll often cook it up for her as a special treat. This weekend I was shopping and decided to get a container of chicken livers, which was obviously too much for one person to eat at a single meal. Kim suggested that I make something we both would like and mentioned chopped liver. That’s when the disembodied spirit of Jeanine Kearney spoke to me from the distant past and said “it’s the fruit, stupid!”

I started with a shallot sautéed in olive oil and butter. When I reached for an apple, I found a Bartlett pear which had a few bruises and was on the edge. It seemed like a frugal move to use it, so I diced it up and readied it for the pan. When the shallots were translucent, I deglazed with an amontillado sherry, added the livers and the pear, and cooked it on medium high until the livers were done and the pears were soft. While this was cooking, I remembered my mom liked to add good Hungarian paprika to her chopped liver,  so I put a goodly amount in with the salt and pepper.

After cooling down a bit, I put it into the food processor and added a piece of rustic bread to soak up moisture and add a little body. Whirrrrr – taste – a little bit of salt and pepper and wowie zowie! This one really worked. Kim and I munched on it warm with matzoh and put the rest in the fridge to set. When I got home from work today it was the first thing out of the fridge for a snack.

The mousse reminded me of the Restaurant Eve foie gras terrine that was served with theblackberry. I also flashed on a liver mousse that I had recently that was served with a wine jelly. So I added a dab of raspberry apricot jam to the mix and it bumped it up a notch. Then I added some hot bread and butter pickles from our friends Jim and Marianna, as Emeril would say, it juked it up notches previously unknown to mankind.

So here it is, my Chicken Liver Mousse with paprika and pears, served with toast points, raspberry apricot preserves and hot bread and butter pickles. I think we just ruined our dinner trying to get the perfect bite. 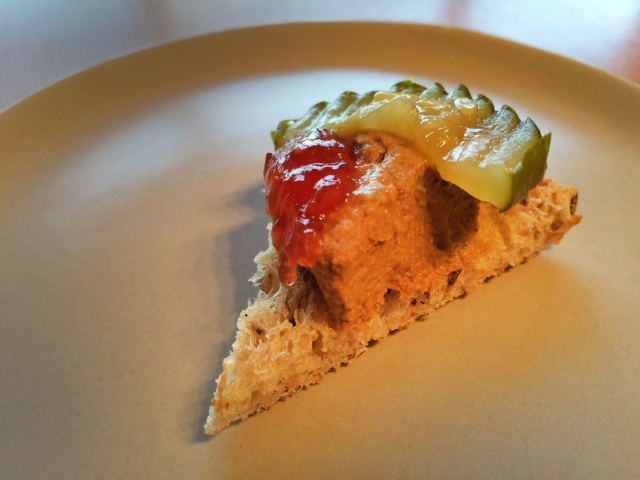